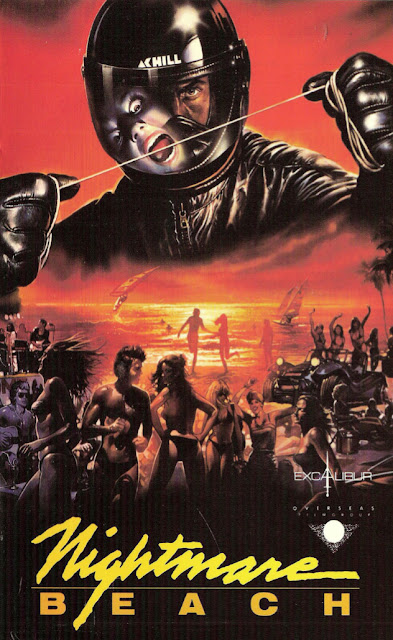 If you're like us, then nothing says September like Spring Break!  OK, you're not like us, and that's a good thing because our neighbors don't look us in the eye anymore.  The point is that we've found a lovely lousy movie to make you dream of partying in South Florida on bath salts: 1988's "Nightmare Beach".

Also known as "Welcome to Spring Break", this terrific turd is a slasher flick set against the debaucherous background of Manatee Beach in Ft. Lauderdale.  Diablo, the leader of a violent biker gang, is executed, but not before vowing to return for revenge.  Just as the throngs of college kids arrive in town, Diablo's body disappears from its grave, and people start to show up dead at the hands of a mysterious helmet-clad motorcyclist.  Two college knuckleheads get pulled into the mix, and start their own investigation, running afoul of bikers and cops alike.  Add in a romance with a tough-as-nails bartender chick, and you got yourself a spring sandwich of awesome.

The film was directed by horrormeister Umberto Lenzi, under the pseudonym Harry Kirkpatrick (you wouldn't want to use your real name, either), and stars John Saxon (featured in another nightmare: "Nightmare on Elm Street") as the take-no-shit police chief.  The soundtrack has more heavy metal than a Superfund site, and the acting is as bad as the movie's bikini contests.  "Nightmare Beach" is a wonderful cheesefest.

The film is in English, but perhaps to prevent English speakers to viewing it, there's no English trailer.  The funniest one we could find is in German, so enjoy:

Come escape the heat in NerdMelt's air-conditioned theater, and get your tickets in advance at a discount.  You can even score a free admission to our show if you enter our Horrible Movie Caption contest -- write the funniest caption to a still of this month's movie, and you'll win a free ticket!  Follow us on Facebook and Twitter to keep updated on when the contest begins.

So wax your board (just not in the theater) and join us on Sept. 6th at NerdMelt!

P.S. - Check out the killer theme song Nerf Herder frontman and internet sensation Parry Gripp wrote for us!
Posted by Horrible Movie Night at 11:22 AM 1 comment: